What’s up with the holey knees? 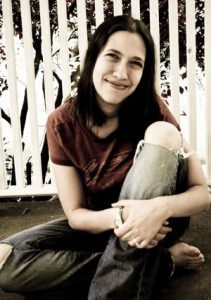 CMT makes you fall down. A lot.

Back when I was in high school I didn’t know that I had CMT; I’d been mis-diagnosed so many times. Had I known it was CMT wreaking havoc on my feet I might’ve gone the leg braces route and I wouldn’t have fallen up the stairs, down the stairs, and in the middle of the hallway so much. My high school had five floors, and while it had one small elevator – only teachers were allowed to use it. With my homeroom in the basement and my French class on the fourth floor, I’m sure you can imagine [insert sarcasm here] what a blast I had as a high schooler.
Even when I did get correctly diagnosed in 2001 they sent me to get fitted for leg braces and I decided I wasn’t going to go that route. Leg braces? There was no way I could walk around in those big metal things. Pride can sometimes be a horrible thing and I had a little too much of it.
I think back now – I’m quickly approaching my one-year-with-braces anniversary – and wonder how much easier my life would’ve been had I gotten them when they wanted me to. Without them I would fall daily. Every pair of pants I owned had knees that looked like these. For a while it was fashionable, so I was OK – but most of the time it wasn’t and I sported the look anyway. In the year I’ve had my braces, I’ve only fallen once.
I don’t have holes in my knees anymore – but a part of me is still that girl smiling in the picture. Too proud to admit something was wrong, too headstrong to give in, and too sensitive to talk about it all. I like to think most of me has matured enough to accept it and move on. The truth is, I’m still trying.

Book Fair! What NOT to do at an SCBWI Conference