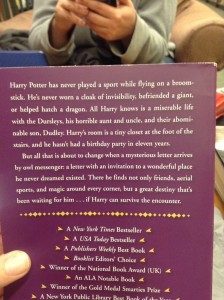 I’m sure you know what TMI means, right?
Too Much Information.

When I sent my first round of queries out for The Chaos Shelter, that’s what my query had. TMI.
Thankfully, I realized it after I started to get rejection after rejection from those first 15 queries. My book was great and I was sure people would love it, but the agents I sent it to just couldn’t get past the bad query.

So after I sulked about the rejections for a month, I picked my feet up and met my critique partner/friend at Barnes and Noble (there she is in the background!). There we grabbed four middle grade books in my genre and I studied them. Hard. Then I looked at a bunch more of the middle grade books I had at home, also in the same genre. I learned so much just from doing that.

I managed to strip my query down to two short paragraphs that only told the basics, and check out the last line in the Harry Potter synopsis above. That last sentence alone would make me want to read the book. High stakes there, right? So that’s what I did (only different!). What are the stakes? What will your MC lose or what can they gain?

Make it big!
Make it exciting!
Make everyone who reads it want to read your book!
And if you need to learn how to do it from other books, then learn from the ones that worked.